Explore the works discussed in the video below. Click the thumbnails to expand. 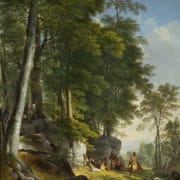 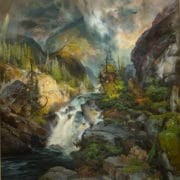 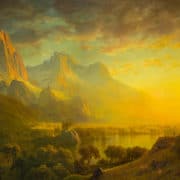 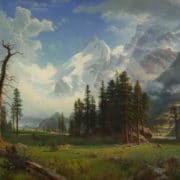 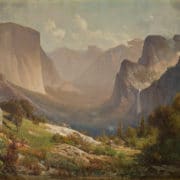 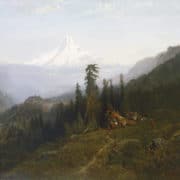 In the early 19th century, the beauty and vast extent of the American landscape were interpreted as signs of divine favor toward the young republic, and the first self-consciously “American” painters were landscapists who shared a fervent patriotism with their fellow citizens. These artists, most of whom resided in New York City and regularly depicted the rugged terrain of the upper Hudson River and Catskill Mountains, are known as the Hudson River School. Later generations of American landscape painters based in New York, including Albert Bierstadt and Thomas Moran, took the Hudson River School style to the Rocky Mountains. Bierstadt and Moran are the best-known of the risk-taking landscape artists who took advantage of government expeditions to experience adventures and explore territory that would not otherwise have been accessible to them. Their objective was to convey the indescribable light and awesome beauty of the Rockies, and Bierstadt and Moran exploited every technical and imaginative faculty in their power to achieve it. Their efforts were rewarded with tremendous popular acclaim, and their success encouraged other eastern landscapists to go west. The watercolors of geological wonders that Moran produced during his travels with Ferdinand Hayden’s 1871 survey of the Yellowstone country helped persuade Congress to set it aside as the first National Park. Worthington Whittredge holds a special place in the art history of Colorado because many of his paintings depict sites that are readily identifiable, despite the changes that have taken place since his western travels in the 1860s and 1870s.